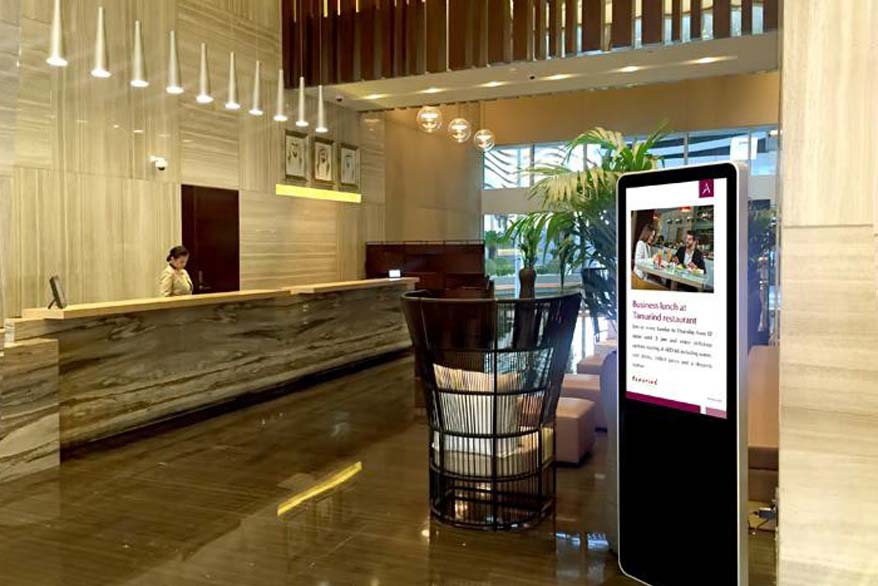 Screendrive has the privilege to serve a number of leading players in the hospitality industry. In this case study, we are presenting the scenario of the hotel Capital Centre Arjaan by Rotana. Situated few steps away from Abu Dhabi National Exhibitions Centre) and Abu Dhabi International Airport, Capital Centre Arjaan is a favorite location for business travelers.

Thanks to the highly committed work done by the preliminary analysis wing (which include members of both Screendrive and Arjaan) we were able to list out and prioritize the Aims and Objectives of digital signage displays in the hotel. The initial study once again asserted the necessity of digital signage displays for commercial/promotional purpose as well as for assistive purpose.

The constructive working of analysis wing was also visible in deciding the screen installation locations. After a thorough investigation, following areas were identified as optimal for digital signage installation.

The company had its own content strategy and preferred in-house development of contents. They make use of Screendrive’s default templates as well as Layout designer according to the needs.

The simplicity of Screendrive CMS has benefitted the client. Without a dedicated content developer or a technical operator, the company has been filling their screens with exciting contents till now. Drag and drop designs and Screendrive digital signage apps have also simplified their efforts. According to the feedbacks given by the client, sorted content management gallery reduced their effort to store and pick the right contents time to time.

We were also able to provide timely assistance to the client time to time. In our frequent feedback initiatives, the client has conveyed very enthusiastic responses; the positive response was not only about our quality services but also about the result they got from digital signage installations.

We are also highly grateful for getting the chance to work with such a client.